The game was a face-to-face one as part of Newbie November -- my mini-effort to evangelize the ASL hobby.

The opponent was "Prawnski", one of my fellow co-workers who is an avid gamer in the fields of Euros and console and PC games. Prawnski enjoys violent action and my description of ASL got him curious to try after work yesterday. This would be one of his first hardcore wargame experiences.

The choice of scenario was an easy one -- S1 Retaking Vierville from Starter Kit #1. It involves very few squads in the beginnings of the scenario but quickly over the course of five turns ramps up with multiple reinforcements showing up from both the American and German sides. There are no support weapons and no AFVs.

Here's a shot of the empty board (notice that it does not use the whole of map y):

And here's the entire OOB of both sides splayed out on the map:

The objective of the scenario was for the American paratroops to hold four key buildings in the centre of board "y" -- ostensibly the French town of Vierville (this is during the early days following D-Day). Here's a shot of the board using VASL (the comment is wrong, it's not ANY building but ALL of them):

I chose to take the Germans as they would do most of the early lifting early on and from my solo plays of this scenario, I felt that they had the hardest time of it. Going into the game I knew that the Americans could not be allowed to reinforce his initial squads in the village so I tasked the second line Germans coming in from the west with harrassment duties toward the north end of the map (it's the right side here):

We set-up the scenario with my trusty map condom and Plano-ed counters and I began the introduction to ASL with a brief overview of the counters and the geomorphic nature of the maps. I briefly outlined the sequence of play (use this!) and the scenario and the objectives and Prawnski set his squads up and we started! Here is the initial set-up in real life (sorry about the flash!): 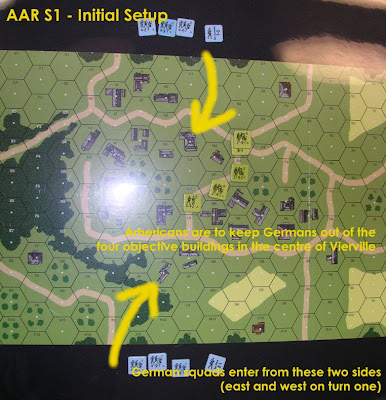 Here's another view of the action from a lower perspective with victory hexes circled: 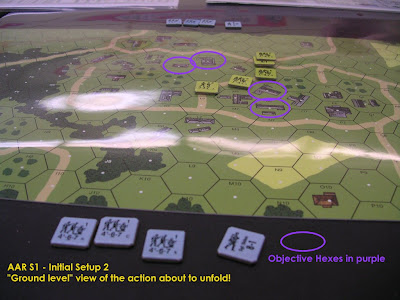 Here's the action at approximately turn 2 during the American's phase: 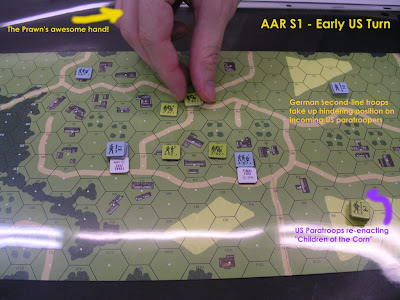 The first two turns went fairly slowly as I explained and ran through the Sequence of Play. Luckily I'm pretty good at explaining things and Prawnski is a quick study with his prior gaming experience. You'll note from the photo that I have a fairly strong stack in yK6 shooting at the half-squad across the street and a squad in yP6 probing into the centre victory hexes. Prawnski has split his initial squads to protect both sets of victory hexes thanks to the diversionary second-line German squad in yI2. Finally, check out the fun on the north (right) side of the board. The first set of reinforcements has taken the German squads with 7-0 leader in the farmhouse in yU3 a bit too seriously and run through the wheat fields trying to reinforce the village.

Prawnski's relative inexperience was pretty balanced by some of my atrocious rolling. On multiple occasions I had massive firepower arrayed against him and rolled eleven's. Nice. And no I'm not complaining -- I have long since made peace with the dice gods in all my games. Besides, if ASL is good for one thing, it's the fantastic stories that come out of these desparate and nutty situations. [As an aside: Prawnski liked to make the ominous Terminator music when he advanced squads... spooky!]

By the start of turn three we can see things starting to develop even more in Vierville. Here is a close-up of the action in the centre of the map (notice that in trying to run his half-squad away they were shot up): 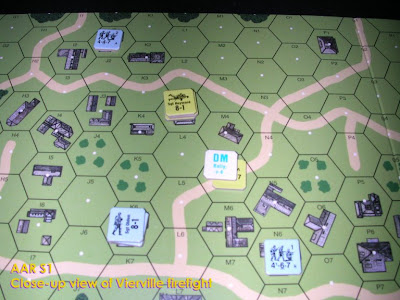 As turn three commenced the action looked like this: 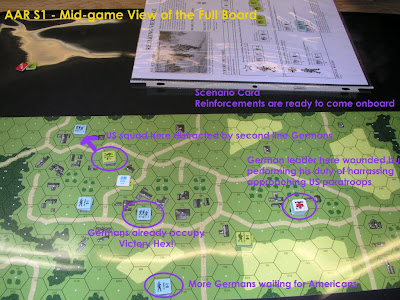 Again to explain what has happened, a German squad already controls a victory hex (yN6)with at least two other stacks waiting outside the village in stone farmhouses waiting to shoot up and delay reinforcements. Note the one eliminated squad off the board -- they ran into an ambush in CC and were bayonetted. Nasty!

By the late game, around turn 3-4, the situation had become even more grim for the Americans. 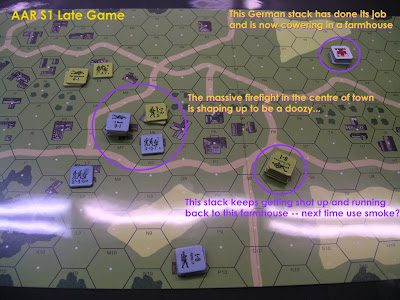 Though the reinforcements actually shot up the second-line squad in the north (who had a wounded leader and kept failing morale checks into casualty reduction), they couldn't get around the stack in yO10. They would rumble into the street and get half shot up and rout back into their little hut on the edge of the field only to try again for the same result later. It was rather amusing actually. I explained smoke exponents but Prawnski shrugged off the advice and felt that no elite airborne unit worth it's salt would need it...

Here's the situation at the start of the last turn: 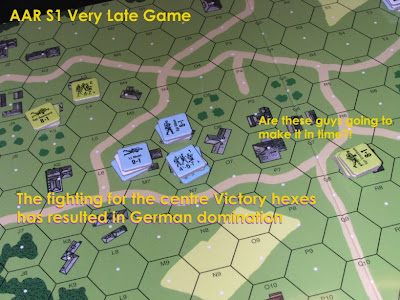 I have advanced my German squads into a massive three stack defense of the centre victory hexes. I offered Prawnski a cessation to the hostilities but he respectfully declined and threw his men into a final, last-ditch effort. Not shown are some of the nasty point blank fires that occurred and the equally destructive close combats in the victory hexes -- if you're wondering where all his guys are... If Prawnski made one mistake, the typical newbie one, is that as an attacker he used way too much prep fire trying to dislodge my units. Having given up the initiative by losing the centre of Vierville I could wait for him to come to me.

And basically the game ended with a dominating German victory after about 2.5 hours. Did the Prawn enjoy himself? Immensely if he is to be believed. Another of the joys I find in gaming and ASL is the debriefing and end of game discussion about memorable moments and lost opportunities and head slapping as you find out the rules you messed up big time. Alas that is for part 2 when I'll reveal some lessons learned about ASL after S1 Retaking Vierville. 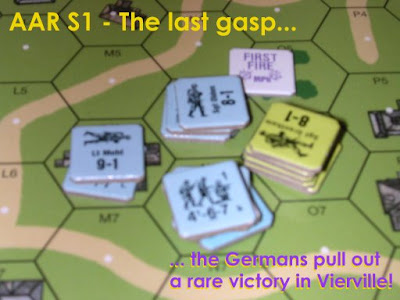 Very interesting. Im looking forward to more AARs of your progress with ASL. Keep up the good work!

Congratulations on winning with the Germans. I'm also new to ASL, trying to go by way of the ASLSKs. Although, I have frequently played the orginal SL many, many years ago. Anyway, I've played this scenario several times solo and also against another player and every time, the Americans won convincingly, usually by turn 4. Even with the use of tactics I've come across on other ASL websites, I find those American 747s to be quite a powerful force with a high FP, especially if they used PBF, and moral.
I have made a comment on one of your other threads that if you would like to try a nice incremental learning scenario, try S8 that is one of MMP's Operation Magazine. Hopefully they'll release it as a pdf on their website like they did S7. It uses board y and has the Germans using MGs. No DCs or FTs and not to many buildings as board z (e.g. S2)

Hey mdnowak, it's funny you should mention S8 but I *just* received the Operations magazine yesterday with the scenario in it so I might try it out soon!

Interesting and educational AAR. I just played this scenario as my first ASL game ever. I was under the impression that my Germans had to enter on the southern roads at the east and west side of the board, so I had little impact on slowing the reinforcements of my opponent, so he kept double timing them straight to the victory hexes.

Meanwhile, I kept having trouble crossing the streets. At some point (with my initial second-line units on the west side) I did occupy a victory hex, but I lost it again. My desperate rush in the final turn would have succeeded if only my opponent's soldiers had been unable to find their triggers. Instead, I got lots of bodies in the street.

One of my conclusions after that game is that some of my units would have to enter more to the north, to slow the US reinforcements. I'm glad to see how well that can work.

Yeah, I have to say I had the benefit of a few games of solo ASL on this scenario before I faced the Prawn.

Read the set-up carefully and definitely try to place your squads in as advantageous a position as possible to start. Five turns is NOT a long time!

Who is this scrub?!

scrub
Canada
A life-long gamer from the GTA in Ontario, Canada, whose silly geek attention has been riveted on ASL. This is his humble blog.

The last five games I've played: A random game from my collection: